EPM 27633 lies 70 km SSW of Coen. Alluvial gold and heavy minerals exist. Exploration will focus on the Curwon Copper Prospect where a porphyritic rhyolite intrudes a package of metasediments. Widespread copper mineralisation has been detected in historic scout drilling over a 2 x 1.5 km area. Drill results of interest include a long intersection of 105m @ 0.21% Cu and 0.08 g/t Au occurring from51m downhole depth. This zone includes a clear hypogene interval of 12m @ 0.15g/t Au and 0.31% Cu from 96m depth in a silicified and brecciated porphyry intrusive which remains untested at depth. Other drill intersections of 58m @0.2 % Cu, 44m @ 0.23% Cu, 34m @ 0.3% Cu, and 33m @ 0.24% Cu confirm the widespread nature of the copper mineralisation. 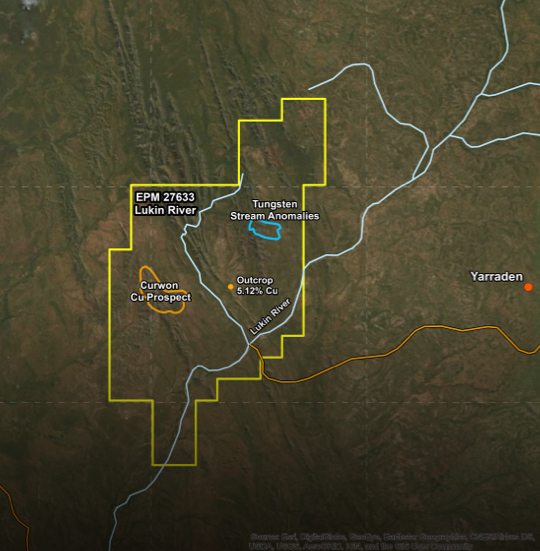 EPM 27632 lies 25 km SW of Coen. Quartz reef-quartz vein structures are seen in over 2km of strike length at Thornbury prospect and include results of 114 g/t Au in outcrop and 4m @ 35.8 g/t Au in channel sampling.

A bulk sample of 23 tonnes collected at Thornbury in the late 1980s averaged 14.3g/t Au and led to a pre-JORC indicated resource estimate of 72,800 t @ 2.75 g/t Au in northern sections of the Thornbury prospect to a nominal 30m depth. The reef, hosted in schists and gneiss remains open at depth.

A nearby historic alluvial resource has been estimated at Thornbury Creek ranging from 120,000m³ to 200,000m³ at an average recovered grade of 0.7g/m³ Au with a monazite content estimated at 4-5 kg/m³. Other areas of interest include over 20km² exposure of a Devonian allanite-bearing monzogranite, patches of aluminous laterite duricrust in the west which include bauxite and the petrographic confirmation of >5% graphite in a drillhole testing a prominent regional aeromagnetic anomaly. 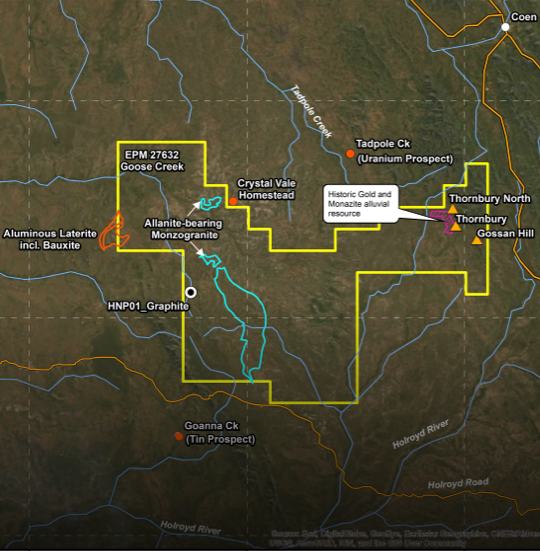